In a recent NYTimes article about Uber drivers organizing in response to fare cuts, there was a description of the rating system and how it affects drivers:

They [drivers] are also constrained by the all-important rating system — maintain an average of around 4.6 out of 5 stars from customers in many cities or risk being deactivated — to behave a certain way, like not marketing other businesses to passengers.

Using “marketing a side business” as an example of behavior the reputation system curtails is like saying “the police prevent many crimes, like selling counterfeit maple syrup“—technically true, but it gives the wrong impression about what’s typical.

Bad experiences on ride-sharing apps presumably mirrors bad experiences in taxis: drivers having a dirty car, talking while driving, being rude, driving dangerously or inefficiently and so on. I’d wager that “marketing a side business” complaints more or less never happen. If they do happen, it’s probably because the driver was particularly aggressive or annoying about promoting their business (or the passenger was idiosyncratically touchy). It certainly doesn’t seem to be against Uber’s policy—an Uber spokesperson said recently that Uber not only condones it, but encourages it.

Being subject to a reputation system is certainly personally costly to drivers—who likes being accountable?—but it’s not clear to me that even drivers as a whole should dislike them, so long as they apply to every driver. Bad experiences from things like poor driving or unclean vehicles are not just costly to passengers, but are also costly to other drivers, as they reduce the total demand for transportation services (NB: Chris Nosko & Steve Tadelis have a really nice paper quantifying the effects of these negative spillovers on other sellers, in the context of eBay). The problem with quality in the taxi industry historically is that competition doesn’t “work” to fix quality problems.

Competition can’t solve quality problems because a passenger only learns someone was bad after already having the bad experience. Because of the way taxi hails work, passengers can’t meaningfully harm the driver by taking their business elsewhere in the future, like they could with a bad experience at a restaurant. As such, the bad apple drivers don’t have incentives up front to be good or to improve. (The same also goes for the other problem of bad passengers, which there are and the reputation system helps deal with.) Reputation systems—while far from perfect—solve this problem.

While reputation systems seem like something only a computer-mediated platform like Uber and Lyft can have,  there’s no reason (other than cost) why regulated taxis couldn’t also start having reputation systems. Taxis could ask for passenger feedback in the car using the touch screen, and then use some of the advertising real estate outside the car to show average driver feedback scores to would-be passengers. This would probably be more socially useful than the usual NYC advertisements on top of yellow cabs, such as for gentleman’s clubs, e-cigarettes, and yellow cabs. 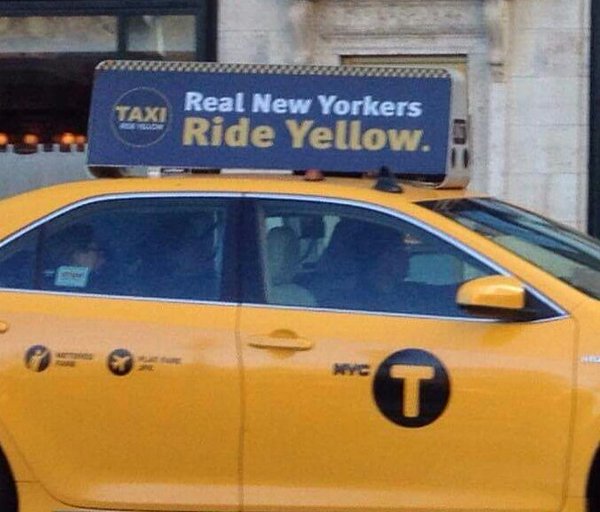 Disclosure: I worked with their data science team in the summer of 2015. However, the direction of causality is that I wanted to work with Uber because they are amazing; I don’t think Uber is amazing because I worked for them.