In a recent Information article, Sam Lessin proposed a Bay Area 5% equity tax on startups. It’s an interesting idea; I don’t know whether it’s “good” idea. This blog post will not answer the “good” question, but I’d like to use this proposal to explore some ideas in public policy and economics and talk about some of my work that bears on the question.

If a 5% equity tax were imposed, what would happen? Ideally, we’d have a true experiment to settle the question: say we had 300 more or less equivalent Silicon Valleys, half of which got the tax, half of which didn’t, and then we’d check in on them in 5 or 10 years. Yeah, so that’s not going to work.

The problem is clear—we don’t have that many Silicon Valleys, we don’t have that much time, and we certainly don’t have the political power to impose such a tax randomly. Further, it is not clear what we should even look at to assess “good”—we could see how much revenue that tax generated, but what we care about is the revenue generated at what cost to society. If the shadow of a 5% tax causes a huge reduction in the number of startups, then whatever is raised could be very costly indeed. Though even saying something strong here would require some notion of the “quality” of the startups the tax displaced or prevented and whether some other startup would have just filled its place (e.g., kill Uber, get Lyft). We’d also care about who ultimately paid the tax, as the incidence is unclear—is it entrepreneurs? VCs? Workers in the tech sector? Landlords? Consumers of what Silicon Valley makes?

To assess the proposal, we’re going to need to be less empirical and more theoretical. I am highly empirical. I’m a card-carrying member of the credibility revolution. Most of my papers are not just empirical but experimental. That being said, there are important policy questions we care about that we need to answer quickly that existing empirical work just does not speak to. That leaves economic theory or guessing.

My working paper, “A Model of Entrepreneurial Clusters, with an Application to the Efficiency of Entrepreneurship” is theory paper designed to answer this kind of question (among others). The model is not complex, but it has a few too many moving pieces for a blog post, but I can sketch out the relevant parts and show how to apply it.

In a nutshell, the paper describes a model with three important markets: the market for venture capital, the market for “engineers” and the product market for what successful startups sell. In the paper, would-be entrepreneurs weigh the expected returns to doing a startup to the “safe” returns to being an engineer/employee. A key feature of the model is the notion that lots of would-be entrepreneurs can pursue the same “idea” but that there is a single winner on each idea. This has some implications for the entrepreneurial system. One less startup does mean one less shot at commercializing some innovation, but if lots of startups were pursuing more of less the same idea, the welfare consequences of “losing” that startup to employment is not so bad. Furthermore, it doesn’t have much of a labor market consequences either—there is no “missing” successful startup that is no longer demanding labor.

Anyway, getting back to the tax question. We can think of the tax as increasing the cost of doing a startup. The effects of such a shock are worked out in Section 3.8 in the paper. This increase in cost shifts some would-be entrepreneurs back into the labor market, which lowers wages. This, to some extent, offsets the effect of the tax from the entrepreneurs perspective, as it lowers startup labor costs, making startups ex ante more attractive (imagine Google, but getting to pay 3% lower wages—starting Google is more attractive). So some of the tax gets borne by workers. How much? Well, in the model, the effect of a small change in startup costs on wages is

The model says that the overall surplus of the system is proportional to engineer wages in equilibrium. As such, what we would hope, as a social planner, is that the tax does not lower wages much in equilibrium. This happens when the startup success probability is highly elastic. A key feature of the model is that a highly elastic startup success probability is the sign in the model of too much entrepreneurship, in the sense that there are lots of entrepreneurs pursuing more of less the same ideas. In the model, ideas differ in their perceived “quality” and obviously good ideas get lots of entrants pursuing them, while only the marginal ideas get the efficient number of entrepreneurs (perhaps the ideas-that-seem-bad-but-are-actually-good). The figure below is the key figure from the paper: 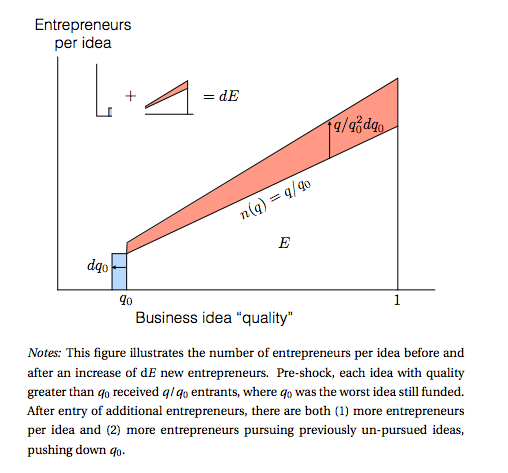 To wrap it up, the model says that if you think there is lots of duplicative entrepreneurship right now—too many entrepreneurs pursuing more or less the same idea—the model says that Sam’s tax is very likely to be a good idea, as it will mostly reduce, on the margin, startups pursuing ideas that were already being pursued, and hence the social welfare consequences will be minimal (interestingly, I think this elasticity question probably can be pursued empirically, using booms and busts in startup funding and/or technological shocks). Is my model the right way to model things? I have no idea, but it’s *a* model and we have to make choices. Of course, there are lots of considerations this analysis doesn’t consider, but I think it’s a  starting point for thinking about the issue, and also potentially the impetus for newer, better models.

2SLS data setup. Note that there is RV u that appears in both x and in the error term. There is also an IV, z, that affects x but not u.

Note that the real coefficient on x is 2, but the estimated coefficient biased upwards. Now we can do the first stage:

and now the coefficient estimates are close to the true values:

This code constructs the design matrix for a panel with both time and individual fixed effects and then estimates the model.

These are some notes for myself on econometrics in Mathematica.

Set up the data 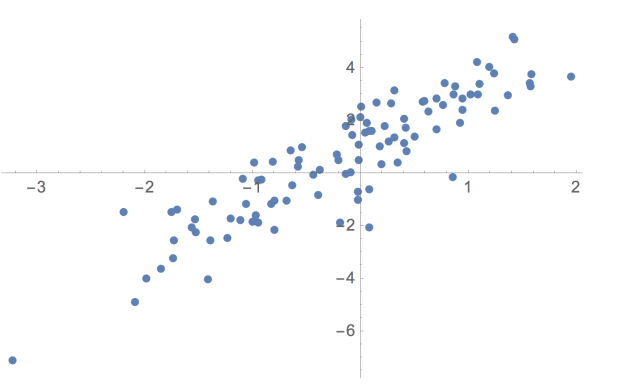 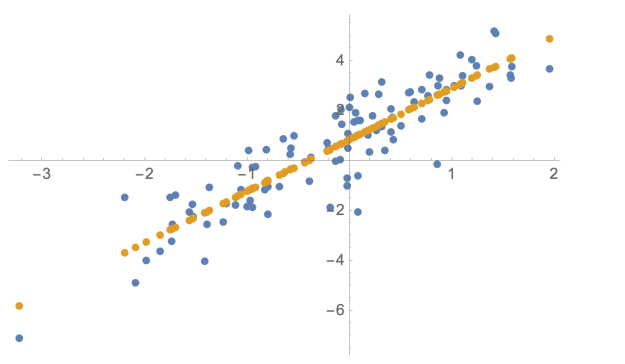 Noah Smith has an article proposing some kind quasi-mandatory national service. The end-goal is not, say, winning WWII, but rather the social cohesion side-effect gained from making young people from different backgrounds work together. For many reasons, I think this is a bad idea, but perhaps the most important is that for it to “work”—to really forge some kind of deep band-of-brothers connection, you’d have to impose terrible costs on the participants.

The reason military service is described as “service” or a “sacrifice” is that is, even in peace time. You risk death and terrible injuries, both mental and physical. You lose a great deal of personal freedom and gain a great deal of worry and anxiety. You risk seeing your friends and people you are responsible for killed and maimed. You spend months and even years away from loved ones. I spent 5 years in the Army as a tank platoon leader & company executive officer, after 4 years at West Point. Of my active duty time, 15 months were spent in Iraq (Baghdad and Karbala). It was, without a doubt, the worst experience of my life—nothing else even comes close, and I got off easy.

One might say, well, this is just the “war” version of military service. Not really. Outside of combat, back in Germany: one soldier in my battalion (slowly) drowned when his tank got stuck in deep mud during a training exercise and the driver’s compartment filled with water; another in my brigade was electrocuted when loading tanks onto rail cars; another young soldier from my brigade was, two weeks after arriving in Germany, promptly robbed & beaten to death by two other privates from his battalion. With our deployment looming, one lieutenant in our brigade went AWOL and later killed himself. And I’m not considering the numerous injuries. This was never summer camp.

When you peel back the superficially appealing aspects of military service—focus on teamwork, training, college benefits, supposed egalitarian design etc., you’re confronted with the fact that militaries are impersonal bureaucracies that (1)  treat soldiers as a means to an end, and (2) are designed to efficiency kill people and destroy things. Both features are necessary , but that does not make them less evil. Participating in those two functions, no matter how just the cause, is mental damaging for many, and deeply unpleasant for almost everyone.

So that’s all cost. Does military service “work” to build cohesion? I would give a qualified “yes,” but I don’t think it’s a generalized social cohesion Smith is after anyway—I don’t feel some deep attachment to the white working class, though I am more familiar with that culture than I otherwise would be. I’m sure I know more Trump supporters than the average (any?) NYU professor, but I don’t think I’m any more sympathetic. I have a bond to soldiers from my *platoon* and a deep friendship with some of my fellow officers, but here’s the rub—it’s based on the shared sacrifice. If we had just spent our time together fixing up trails or building playgrounds, those fellow soldiers would be something I already have lots of—former work colleagues.

To wrap it up, society doesn’t get the cohesion without the costly sacrifice, and creating that sacrifice artificially would be deeply wrong. And if the goal of mandatory service is just to get people to meet people from other backgrounds—say the kind of band-of-brothers level cohesion isn’t needed—surely there are cheaper, less coercive ways to do it.

One sociological critique of economics is that unlike the physical sciences, economic research can affect the thing it studies. I might not be using the jargon the correct way, but the basic idea is that economics is “performative“—it’s not just a magnifying glass—it’s a magnifying glass that sometimes focuses the light and burns what you’re looking at. I have an example of this from my own work that bugs me more than a little bit, but is ultimately, my own fault. Let me explain.

So back in graduate school, Lydia Chilton and I wrote a paper called “The Labor Economics of Paid Crowdsourcing” (data & code here). In a nutshell, we introduced the labor economics way of thinking about labor supply to the crowdsourcing/computer science crowd. We also did some experiments where we varied earnings to see how workers reacted on MTurk. We thought the really cool “so what” of the paper was that we presented strong evidence for target earning—that workers had a preference for earning amounts of money evenly divisible by 5 (here’s the key figure–note that taller black histogram bars): 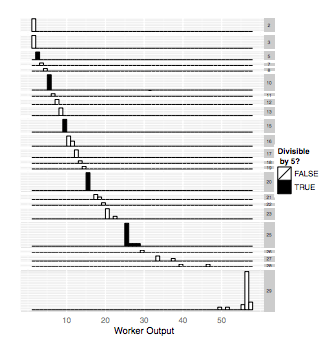 Almost as an afterthought, we estimated the distribution of worker reservation wages for our (*very* unusual) task. We came up with a median value of $1.38/hour, using some strong assumptions about functional form. We put this in the abstract & we even discussed how it could be used to predict how many people would accept a task, because every paper has to make some claim to how it is useful. 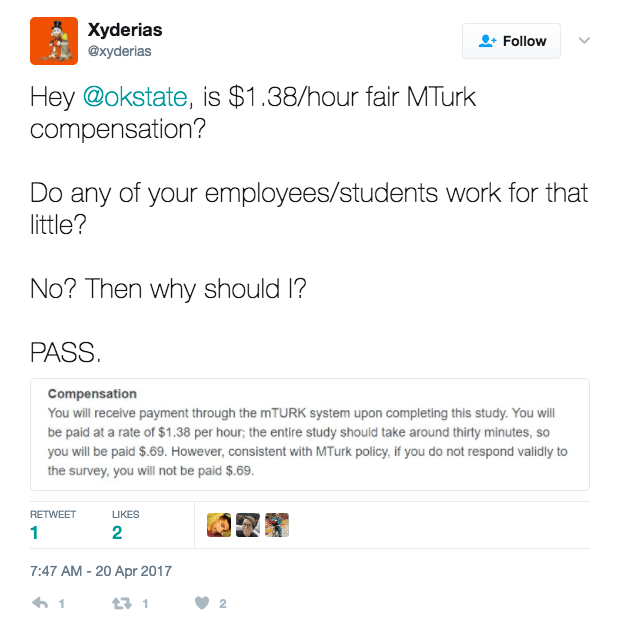 Hmmm, I wonder where that $1.38/hour figure came from. Anyway, mea culpa. If you’re a MTurk worker, my apologies. Feel free to cite this blog post as the authority that $1.38/hour is a silly number that shouldn’t anchor wages.