Today I attended the 5th year anniversary celebration for MSR NYC. There was a great group of speakers and panelists—I’m super impressed by what MSR has accomplished. One topic that came up at several points during the day was the labor market effects of technological developments—particularly that powerful AI might displace many workers.

Economists have traditionally been sanguine about the effects of technological change on the labor market, viewing widespread technological unemployment as unlikely. This perspective is based on the historical experience of substantial technological change not having persistent disemployment effects. However, it has been pointed out that we have one vivid example where this optimism has not been warranted—what I call the parable of the horse.

The story is that the internal combustion engine came along and horses saw their marginal product decline below the cost of their feed and so horses disappeared, at least in the “labor” market. This is undoubtedly true—the figure below shows the number of horses (and mules) in the US (from The Demographics of the U.S. Equine Population). The implication is that today’s “horses”—low skilled labor or maybe even labor in general—will disappear as AI can do more and more tasks. 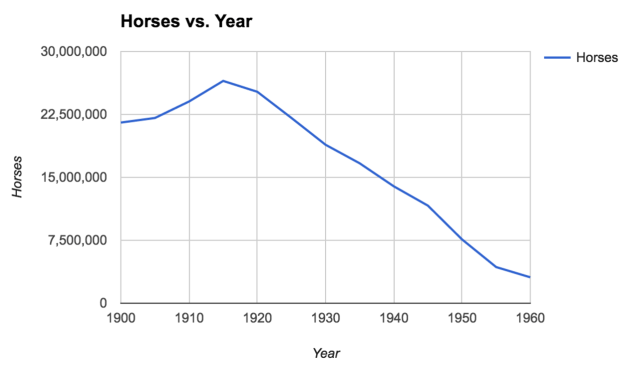 I find the horse parable interesting, but unpersuasive—at least with respect to how it is likely to affect relatively low-skilled workers—because I think the analogy misses the reason why horses fared so poorly. The problem was not that they were “low skilled”  but rather their extreme specialization. Horses did one job and one job only—exerting physical force, which could be used to pull or push things. That they could be almost entirely displaced by a superior pushing/pulling technology is, in some sense, not surprising. But what I think is important in the human labor market is that being able to do one thing—and one thing only—is typically a characteristic of high skilled labor, not low skilled labor.

Most low-skilled labor is no longer like horse labor, in that the low-skilled jobs that exist now are those that require some mix of physical, intellectual and even “emotional” skills. This mix makes full automation challenging. But even when some specific job does “fall” to automation, there is a still a very large pool of remaining jobs that could still need to be done and require relatively little skill or new training, by definition of being low-skilled. In short, one advantage of the low skilled labor market is that there are lots of jobs you qualify for. The downside, of course, is that precisely because lots of people can qualify for those jobs and so wages are low. The workers that are vulnerable to technical change—in the sense that they are likely to experience large declines in income—are those workers with highly specialized skills.

Truck driving as a low-skilled example

To give a more concrete example, consider the job of truck driver, which might be on the automation chopping block. First, many people with the job “truck driver” are actually some combination of sales representative, inventory-taker, first line mechanic, warehouse worker, forklift operator and so on. As such, it is far from obvious that even if substantial amounts of driving end up being done through automation that labor demand for “truck driver” would fall.

Second, even if the truck driver occupation sees a large negative demand shock, what other jobs could a truck driver do that pay about the same? Well, let’s look at the BLS  occupational data. The table below shows the most recent BLS occupational data, w/ US employment totals and average hourly wages, sorted by average hourly wage. I restricted the list to occupations with more than 500K employees. We can see that being a light truck driver (i.e., not a heavy truck transporting freight or heavy equipment) pays about $16.50/hour, which is below the median wage in the US but still substantially higher than the minimum wage.

We can see that both above and below, there are a number of jobs that are plausible substitute occupations for a displaced truck driver. For example, of those below, most require no formal education or certification, perhaps except for substitute teachers or medical assistants. If we go higher, we start to see jobs that require more skills or that are more physically taxing or dangerous (e.g., construction laborer), but are still reasonable substitutes. For example, many truck drivers are also decent mechanics and perhaps with some more training, could find work as “Maintenance and Repair Workers, General.”

Not only do displaced truck drivers have lots of “nearby” occupations that pay about the same with little additional human capital requirements, the displaced drivers are not likely to drive down wages very much in their new occupations. There are, of course, lots of truck drivers, but if they split into a reasonably large chunk of other occupations, the new entrants would not be much of a supply shock.

Now we’ll look at a more specialized occupation. Let’s consider accountants and auditors (even this one still seems far away from being even remotely automatable). It pays quite nicely and requires substantial specialized skill. If we look at nearby jobs, very few would be open to a displaced accountant without substantial re-training.

Accountants are the “horses” here—the ones that are vulnerable to large drop offs in earnings because of their specialization. Fortunately, if we care about inequality, this is the “right” group to be affected. Because of their existing financial wealth and their general human capital, they are likely better able to deal with the disequilibria created by technological change. 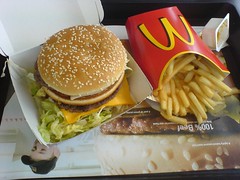