Amazon recently announced that they are going to double their percentage fee, from 10% to 20%. At least among the people I follow on Twitter (lots of academics that use MTurk for research), this has caused much consternation. A price increase is clearly bad for workers and bad for requestors (who gets hurt worse will depend on relative elasticities), but what about Amazon?

When I first got interested in online labor markets, I wrote  a short paper (“Online Labor Markets” ) in which I tried to figure out what was the optimal ad valorem charge from the platform’s perspective.  The relevant section is below, but the main conclusion was that most online platforms were pricing as if demand and/or supply was highly elastic.  In other words, that even a small increase in price would send nearly all customers elsewhere. 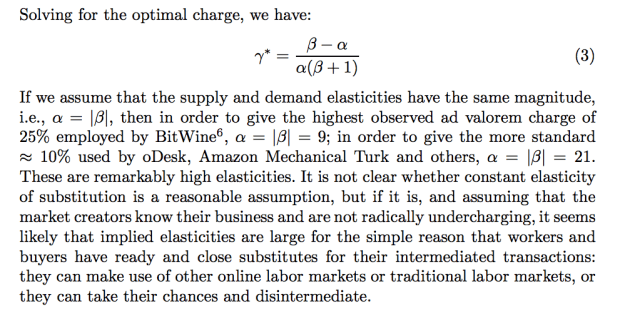 The basic reason is that when the platform doubles its fees from 10% to 20%, they double their revenue (if everything stays the same) but only increase the cost of Using MTurk for users by about 10%. Of course, there is some decline in usage (demand curves slope down)  which reduces profits, but it has to be a huge reduction to make up for the direct increase in revenue to the platform. This is more or less the same argument for why cutting taxes doesn’t increase revenue unless tax rates are incredibly high—the consensus estimate is that the revenue maximizing tax rate is in the mid 70%.

My guess is that MTurk has fairly few substitutes and someone at Amazon decided it should be making more money as a service. Fortunately for us as observers, because of the great work of Panos Ipeirotis, we’ll get to see what happens.